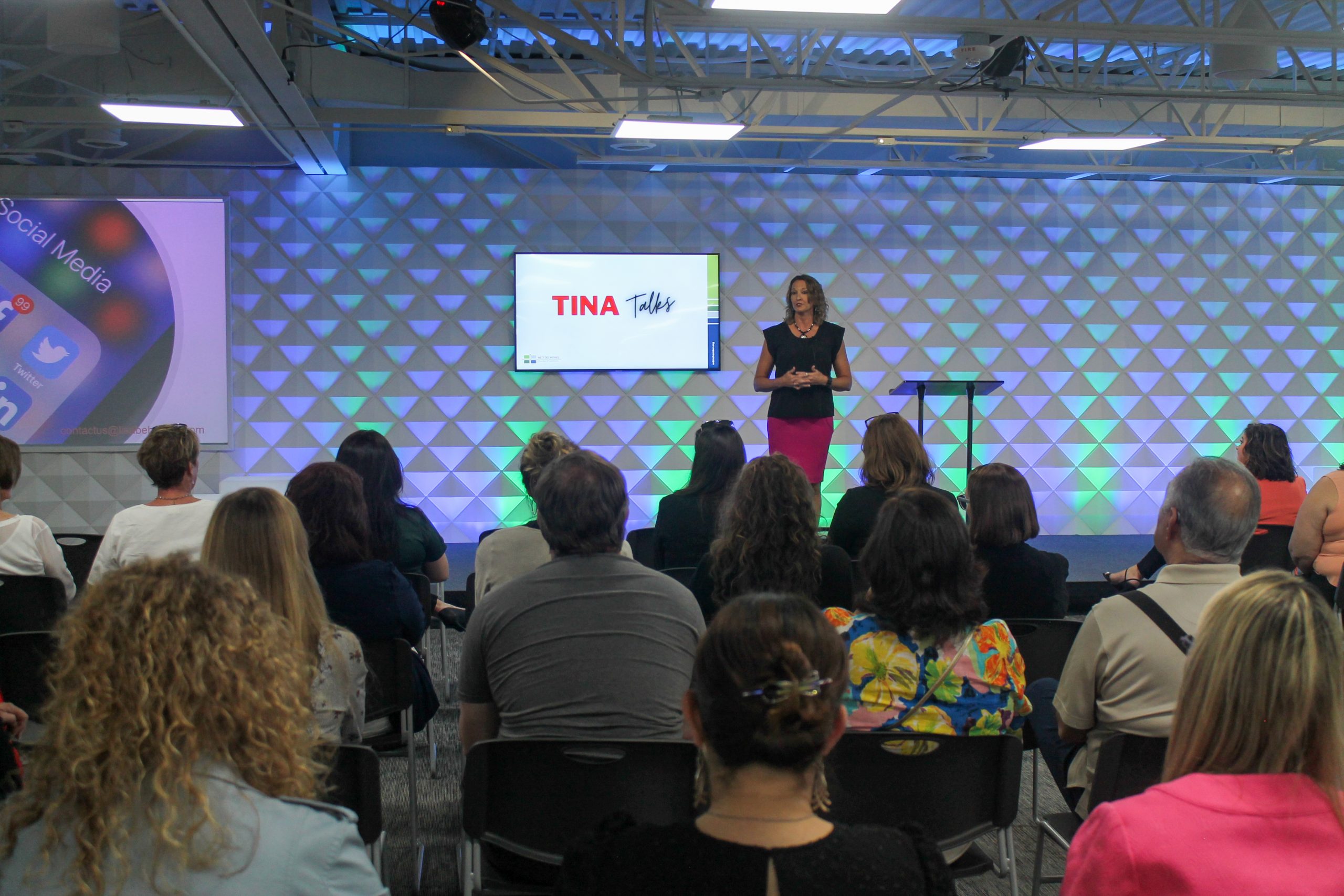 In 2022, Tina Talks brought women together to learn how to succeed in business and entrepreneurship from 8 of the region’s top female leaders. The theme was #ForOthers, and promoted learning how to make unique contributions that help positively impact others and the world around you. Guests also had a chance to network with peers and advance their career with game-changing connections in an afternoon cocktail social. 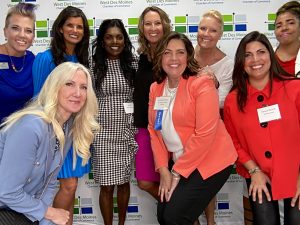 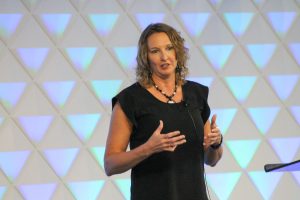 Lisa Behrends is the Director of Development for Meals of the Heartland. She started off her presentation with a picture of her hiking in one of her favorite places, Arizona. However, what was hidden beneath was her own personal struggles. At the time, she was unemployed, had stacks of medical bills, and struggling with anxiety. Behrends pointed out that it’s hard to know what’s really going on in people’s lives. Behind the scenes, people are struggling.

Behrends emphasized the importance of women connecting with one another. She offered three different strategies for connection: connect intentionally with others, create a safe space to learn other’s stories, and connect one another with each other.

In fact, she implemented her strategies during her 50th birthday trip. She invited a person from each phase of her life to go on a vacation. Behrends was the only one who knew each member of the trip, but she created a safe space for each other to get to know one another. Each of them bonded and learned about each other’s stories.

At the end of her speech, she challenged the audience to connect with somebody they know or someone they don’t within the next 24 hours. 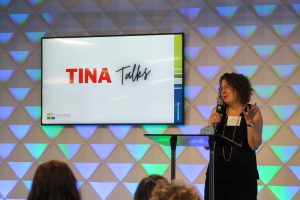 Kristine McIntyre is the Stage Director at the Des Moines Metro Opera. She began by sharing that she often challenges men to guess what she does for a living. And they are often wrong. She said she does not look like what most people think a director looks like. Her slide presentation compared what people typically think geniuses, composers, directors look like. However, McIntyre believes it is time to redefine what a creative genius is.

Oftentimes, women feel like they can not access creative work. So, McIntyre shared three things she learned about creativity during her time as director. First of all, creativity is never just one person, it is a team process dependent on collaboration. Secondly, inspiration does not strike like lightning, instead it comes in small chunks. Lastly, being generous spurs creativity.

McIntyre ended on a positive note. She pointed out that women are continuing to bust the myth of what a creative genius looks like. She hopes that younger women will continue to break boundaries and records. 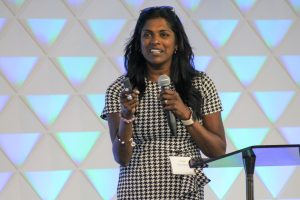 Liz Nead is the founder, speaker, and presenter with Nead Inspiration. She has always struggled answering the question “Who am I?” She sees herself as someone who loves lists, completing her goals, and finding the perfect planner. In 2021, she was having the best year of her life. She was meeting all of her financial goals and felt she was taking care of the ‘financial thing’ and the ‘mom thing’ at the same time. However, her entire life changed in December 2021.

That month, Nead suffered a traumatic brain injury. Her heart stopped three times and she can not remember anything from mid-December to mid-January. She felt she had lost everything she had built and she was not able to pursue her goals for a month.

She found her recovery to be strange. It was like somebody took away her productivity and she did not know who she was anymore.

It forced her to reanswer the question, “Who am I?” She began to write out her answers and she found she was a different person. She said, “Who you are, is a decision.” She no longer defined herself with lists or a paid off credit card. Instead, as beautiful, and strong, and so much more.

She challenged her audience to do the same thing and pull out their phones to answer, “Who am I?” 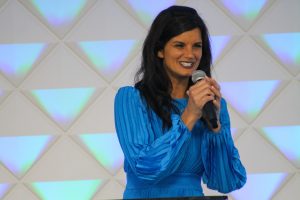 Melissa Vine is the Executive Director of The Beacon. She began her presentation off by saying that kindness is scary, but judging people is not. She used to find herself in a constant state of comparison. She judged everything about others. She continued up until one year, she was told by six different people that the way she interacted with them was hurtful. This, coupled with her announcement of her divorce meant she felt for the first time what it was like to be the recipient of judgment.

After the divorce, Vine went from wealth to poverty. However, she began to live a more authentic life. She was determined to make a new life for herself. In small town Iowa, the town told her they wanted a bakery, so she took that challenge upon herself. Without any knowledge of baking or business, she opened up a bakery. However, she was met with anger– where were the donuts. In the end, she had to sell her bakery in a deficit.

But, Vine’s determination did not stop. She built and grew a more successful business before she sold it for a profit. She shared that she did not get to where she is today because of her successes, instead because of her failures. Vine explained that everyone has things they want to hide, but encouraged everyone to sit in their shame and share their story. She said it would be worth it. 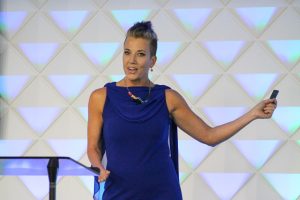 Beth Shelton is the CEO of Girl Scouts of Greater Iowa. Pre-Pandemic she was living a life she wanted to escape. The pandemic only worsened those feelings. She presented a list of ‘Hard Things’ she was experiencing during the pandemic. For one, the pandemic made it difficult to run her organization. March is the month that brings in the biggest cash flow with Girl Scout Cookies. But the pandemic brought that down to almost zero. She was also stuck at home and had difficulty taking care of her kids while handling her job. Additionally, she began a very painful and difficult divorce. Meanwhile, she struggled on her path to sobriety. Lastly, Shelton struggled navigating the world of online dating.

Shelton offered a piece of advice to her audience. She said that you do not have to wait until your life is falling apart to start loving yourself. She suggested three methods of handling any situation: a solution, getting over it, or removing yourself. It is important to focus on what can be controlled.

To finish, she left her audience with one final message. “Success is working with purpose toward a goal, optimizing learning and growth along the way.” 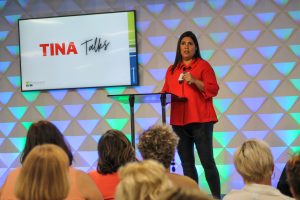 Gilmara Mitchell is the Director of Diversity, Equity, and Inclusion at IMT Insurance. Mitchell has never considered herself a precise person. Instead, she tries to find a balance between her heart and her mind. In society, she finds that there is not a place for emotions anymore. However, Mitchell wants people, especially women to rely on their intuition– an inner GPS.

Mitchell shared that women are born with natural intuitive abilities. It is important to rely on that ability because it leads leaders to action. Gut filled decisions are used in uncertainty, and the best times to use it are doing high risk and high impact decisions.

Mitchell spoke about a time she relied on her intuition. Her inner voice told her it was time to leave her past relationship. She had no concrete evidence she needed to get a divorce, but her heart knew to take the leap. She does not regret that decision. Her intuition and decision gave her time to heal, recover, and find someone new. 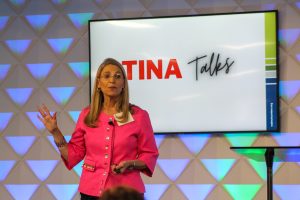 Ramona Wink is a licensed mental health counselor with 515 Therapy & Consulting. She started off by saying that showing up as one’s authentic self is difficult. However, she emphasized the need to be authentic for others.

For twelve years, she ate the same things every day, exercised excessively, and suffered from an eating disorder. She realized in the Summer of 2001 that God was missing from her life. In her self-realization process, she divorced her husband. She received hate mail for it. But she understood that self-control equals success.

In her journey to become her authentic self, she relocated. She also realized that her true love was being a therapist. In her career, she shares that God loves all for everyone’s authentic selves. She eventually got married to her wife Sue in early 2022.

She suggested her audience to think about what small changes can be made to live every moment as a more authentic self. 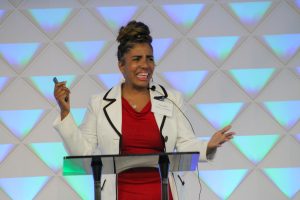 Tess Adams is the Founder and CEO of Power U! Consulting. The message of her presentation was breaking chains through teaching, coaching, and inspiring. Breaking chains was something that Adams personally experienced. Growing up in a blended Des Moines family came with many challenges. At 19, she had two children under two, and their father was an abusive partner. She began to spiral. It led her to addiction and incarceration twice. She asked herself, “What was I doing in there?”

She realized there were three faces of unresolved issues. Or in other words, trauma. There is an ashamed face, a resentment face, and a masked face.

To address these faces she developed a ‘Breaking Chains Action Plan.’
F-Face it, feel it, and forgive it
R- Release it and remove it
E- Evaluate yourself and embrace change
E- Empower others

She referenced Michael Jackson’s “Man in the Mirror.” You must start with the man in the mirror. She asked them to change their ways. Only yourself can change your actions.

She ended her presentation with a powerful moment. Adams, and the rest of the speakers from the afternoon held hands to send the message of empowering others.